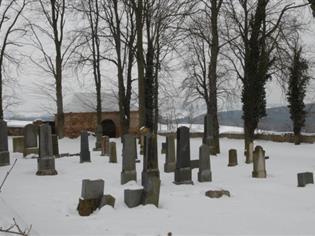 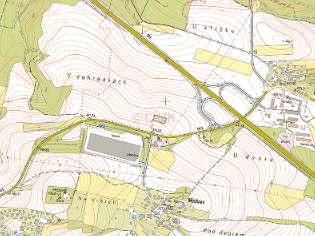 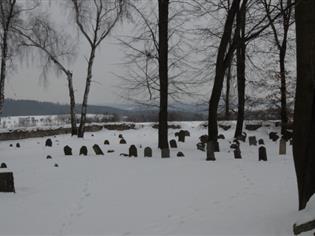 The cemetery is situated about 2 km north-east from the town of Divišov, by the crossroad to Mněnchov and Šternov, today in a field over a highway, at the cadastral area of Měchnov. In 1776, upon a permission of the church and secular authorities the Divišov Jewish community asked for lease of a plot of land belonging to Michal Čejka of Olbraomovice to whom they paid 200 golden coins for the plot of land and the cemetery wall whereas the lease was set for 12 golden coins per year. The cemetery was founded in 1777, the burials took place until the Word War II. The cemetery was devastated by the Hitlerjugend group in 1941. There are around 200 gravestones, a lot of baroque and classicist tomb stones, the oldest ones readable from the end of the 18th century. The ceremonial hall that had its roof sunken was partially renovated in the half of 90´s, complete reconstruction of the cemetery is being done successively.

The local baker makes delicious poppy, cottage cheese, apple, damson cheese, and blueberry cakes. The bakery is a part of the local groceries shop, where the customers can buy the cakes or order them for their wedding parties, family celebrations or just for the breakfast. Or they come and taste this delicacy with a cup of coffee at our terrace.