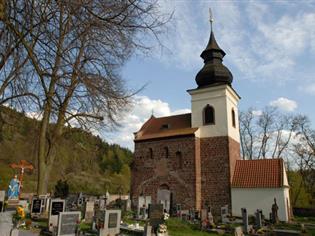 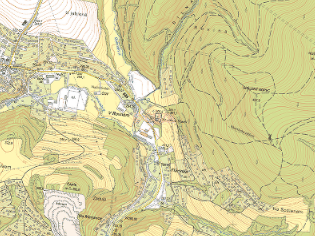 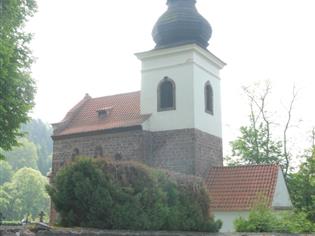 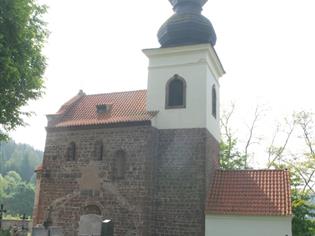 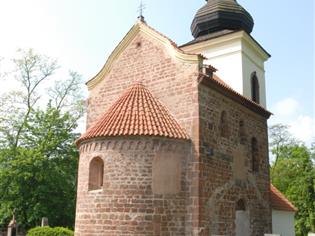 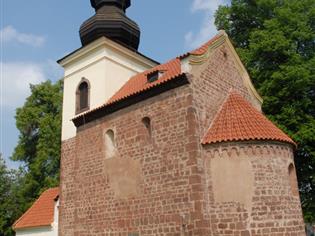 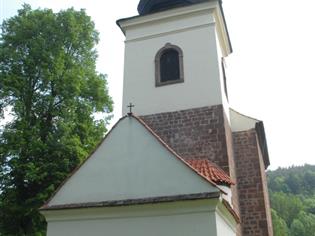 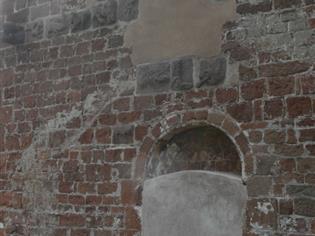 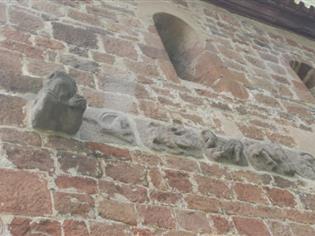 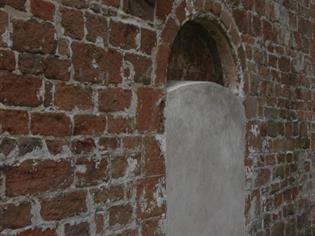 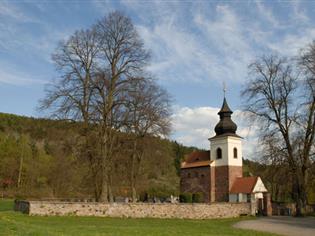 The Roman church *** from the time before 1150 rebuilt first in 1180 and than Late Romanesque around 1230. In 1352 it is proved to be a parish church, the parsonage being commemorated during the entire 15th century. In the following period only small adjustments were made, in the 16th century the original manor tribune was rebuilt into a gallery, in 1708 a snail staircase leading to the tower was built, a hall and vestry were annexed and the tower was roofed anew. The vestry originally adjoined the entrance portal in the northern wall which was walled up after the vestry has been demolished during the church’s restoration in 1950-1953.

A single-aisle, rectangular church with a twice stepped apse and a prismatic tower in the west front. The apse and the aisle are not plastered. Both the apse articulated by lisenas with rounded arch frieze and the partially preserved portal on the northern part of the aisle date back to the renovation in 1240. A number of stone reliefs *** with animal motives from the 12th century were preserved over the portal on the outer northern wall. The reliefs are remarkably similar both in content and the way of decoration to the Benedictine St. James Church in Regensburg.

The aisle of the church is roofed flat with under tower with Late-Romanesque  tribune opening into it through a  semi-circular arch. The original tribune was wooden, being accessible both by the staircase from the aisle and today also by the walled up portal in the northern aisle from the adjacent atrium. The original tribune was probably destroyed by fire of the neighbouring atrium what can be proved by the burned beam in the door head. The triumphal arch is stepped and the apse is vaulted by concha. Unique Romanesque wall paintings  **** preserved in the aisle and the presbytery were discovered in 1944, in the following years renovated by František Fišera. The wall paintings are made in two stages, with time distance about 50-60 years from each other. The first stage paintings come from the time of completing the church after second half of the 12th century and include the apse and triumphal arch decoration and most of the paintings in the southern and northern wall; these paintings are a work of two masters whose work differs in composition, figures characteristics and the way of drawing. The first stage paintings are made in a style, which is  closed  to Salzburg painting in half of the 12th century. The second stage paintings are dated  about 1240, the paintings cover the western wall, the place under the gallery, forming the galleried drapery and paintings on the northern and southern wall; neither these paintings are a work of only one artist, imitating the older layer.  The following pictures are illustrated on the paintings: Majestas Domini, the band of Apostles with the Christ’s bust in the middle and a St.James legend (in the apse), the Christology Cycle (on the southern and northern wall), a St. Nicholas legend (on the western wall), Christ’s baptism (on the southern wall) and not clear iconography fragments under the gallery. Besides, a St.Norber Baroque painting was preserved from the restoration in 1708.

There is no inner equipment in the church except for the original Romanesque stone piece of furniture in the apse.

St. James church was preserved in precious Romanesque style, representing one of the most precious Romanesque monuments in the Czech Republic due to its unique artistic decoration (stone reliefs and paintings). The fact that the oldest prove of Romanesque painting in the CR is the decoration of St.Catherina Castle’s  chapel in Znojmo dated in 1134 just underlines artistic significance of the decoration of St. James Church in Rovne which is only a few years younger ( the older literature states that out of 271 Romanesque structures only 9 have Romanesque decoration; however these numbers can change, since there may be some unknown paintings waiting to be discovered). Apart of its artistic-historical significance the church is also a very nice structure in a beautiful environment not far from the Sázava river. Hoping that it is going to remain like this for ever.

Conducted tour may be arranged with Mrs. Studničková, telephone: 602 861 382 or e-mail: marickova@centrum.cz 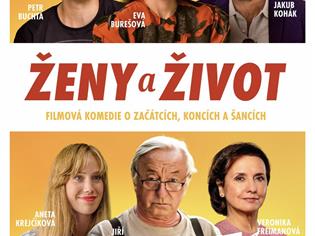 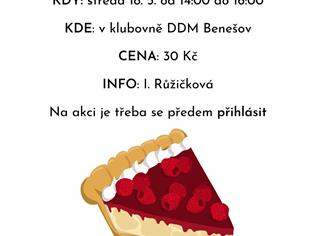 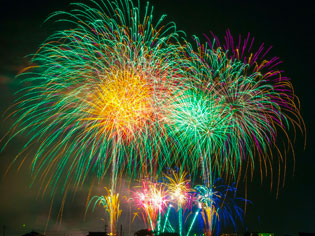