Žižka and the battle of Poříčí nad Sázavou /1420/ 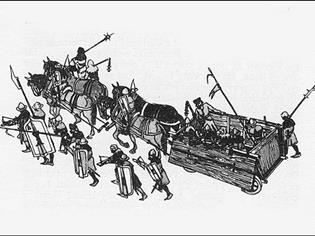 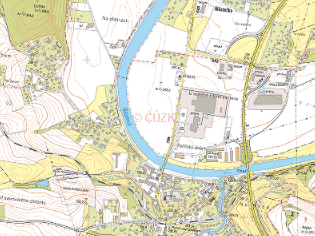 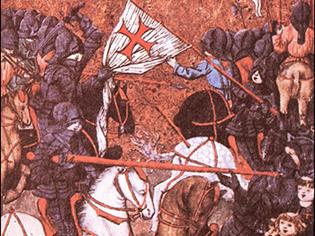 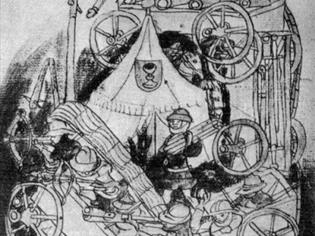 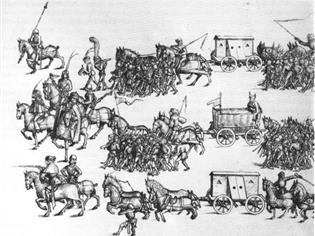 The victorious encampment battle of Poříčí nad Sázavou which took place on the night from May 19 to May 20 plays a significant role in reconstruction of the encampment hordes moving towards Prague in order help the city, threatened by Zikmund. The military-technical point of view is also significant since it is another testimony of the use of Hussite warwagons.

The sources inform very little about the course of the battle of Poříčí, yet when confronting the chroniclers records with the topography situation it is possible to place the battle at least in main features within the terrain. We know sure that the Tábor fighters moved from Benešov which they burned out to the village of Pořící and here they waded through the Sázava river. Thus, they were tracing an old, important communication route, so called Vitorazká or Česká route that headed in this section from Benešov to Poříčí and from there through Nespeky to Prague. The village of Poříčí with the  St.Havel Church  and a fortress was spread on the left bank of the Sázava river, at the mouth of Konopiště brook at that time. Further from the river, on a small hill (the altitude of 282 m), around the St. Peter Church, there was another village of Balkovice.  The wade across the river was about 100 m against the stream from the current bridge, built in 1849 –1850 on the Linec or Budějovická road, tracing the direction of the ancient route only with slight changes.

According to Vavřinec of Březová, the Tábor fighters „ encamped on the fields next to a water and intended to stay there overnight.“ It means that they took up position on the right bank of the Sázava river, on a large lowlands (the altitude of 263 m) made by a wide bend of the river. It can be assumed that they did not know about the enemies approaching from Prague and Kutná Hora, likely protecting themselves only against an eventual attack from Benešov, therefore they came over to the right bank and thus they were protected by the river from the Benešov side, while they might have been easily attacked from the other sides while  being in a lowlands in very unfavourable position. Old Collegiate1 informs that the Benešov Monastery defenders, Hanuš Polenský along with four hundred cavaliers managed to fight off the attack from Tábor. It means that the Tábor fighters might have expected attack from the Benešov side, therefore they stayed immediately by the river in order to guard the wade across the Sázava river and prevent the enemies from crossing the river.

Meanwhile numerous kings battalions approached. From Prague, i.e. from the direction from Ládví to Nespeky arrived cavaliers numbering approximately 1600, from the Prague Castle and Vyšehrad crew, lead by Václav of Dubé. Petr Konopišťský with his people approached from the back, from Benešov.  And a big battalion (about 10 000 armed men), a part of the Crusaders army, lead by Janek with his spouses, an Italian worrier Pipa of Ozory and bailiff Václav Dolinský went along the stream of the Sázava river from Kutná Hora through the Sázava Monastery. Without a doubt, the battalions from Prague and Kutná Hora were sent out in order to prevent the encampments from connection with Prague. Already during the march they were likely encountered by messengers from Benešov, which had been burnt out by the encampments, that specified the location of the encampment movement and brought the kings battalions to Poříčí. The fact that the Benešov defenders informed the crews in Prague and also the Zikmund´s battalions in Kutná Hora about the march of the Tábor battalion as Šmahel 2 indicates is considered excluded due to the distances and shortage of time.

Therefore the Tábor battalion had to cope with the advantage of enemies. The sources differ concerning the strength of the Tábor battalions. Old Collegiate states 9 000 people., manuscript called Sa Starých letopisů speaks only of 3000. Pekař 3  adhers to the latter report while Macek 4 tends to the number stated  by Old Collegiate. According to mine opinion, the Macek´s reasoning is more likely. Macek argues by the fact that these were four hordes connected, besides there were women and children. And the crew which was left in Tábor likely did not have enough people because Mikuláš of Hus must have arrived from Prague to help  Tábor as the town was in danger. In any case, the Tábor encampment at Poříčí was seriously endangered since an attack of such numerous heavy cavalry in a lowland terrain could have devastating results. Therefore the Tábor troops tried to move.

Their guards noticed an approaching enemy and therefore, although it was already evening, Žižka issued an order to march under the protection of the warwagons. The Tábor fighters were threatened from the back by the Petr Konopištský´s people that they could hardly prevent from crossing the river while the Kings cavalry was already approaching from Prague. Besides, the Crusaders battalions appeared on the eastern side. The terrain enabled defence in the hills in the north from the encampment. However, I doubt that the Tábor fighters arrived to the hills by the village of Městečko (the altitude o 302 m) in time because it was from there the cavalry from Prague was approaching. The nearest place for defence were likely the hills in north-west direction, distanced from the wade about 1 km. The Tábor fighters likely moved there, taking advantage of the hilly terrain, full of steep valleys, drops and woods, making the advancement of an attack of the cavalry impossible. Already Palacký5 referred to terrain possibilities and especially Tomek5 (likely based on personal check of the battlefield terrain) whose opinion to the move in north direction towards Městečko, however  I do not consider to be likely from the above-mentioned reasons.

The battle of Poříčí ended up by victory of the encampments that beated back the cavalry attack. The battle must have been very tough as proves Vavřinec of Březová (the old Czech translation of the Vavřinec chronicle adds that the Tábor fighters fought „as giants“. However they differ in the number of losses. Vavřinec speaks of 20 dead from the Kings battalion, Old Collegiate of 50 dead. The Old Collegiate data are to be more likely, proving a bigger range of the battle. And that is supported both by relatively considerable numbers of the fighters on both sides and the fact that the Kings battalion was defeated in such a way that they were not able to put up a further resistance and let the Tábor hordes march towards Prague without any other obstacle. Apart of that as Vavřinec states: „ not few of their spears with bandrols marked by a red cross“

The battle of Pořící nad Sázavou belongs to the new types battles, different form the knight’s troops military encounters in the beginning of the 15th century. The Tábor fighters again used the wagons as a defence mean.  The new features in tactical-operation plans of the battle are proved also by the movement of the Tábor battalion in broken terrain, taking advantage of all its possibilities.

Notes:
Old Collegiate – a contemporary, a direct participant of the revolutionary events is the author of the chronicles records which is called Kronika starého kolegiáta pražského (Old Prague Collegiate chronicle ) in the specialized literature. The author belongs obviously to the conservative Hussite wing. 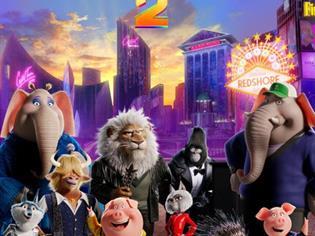 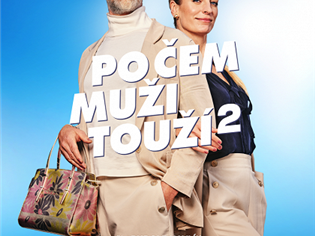 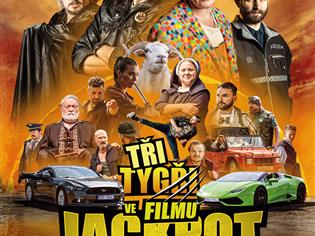